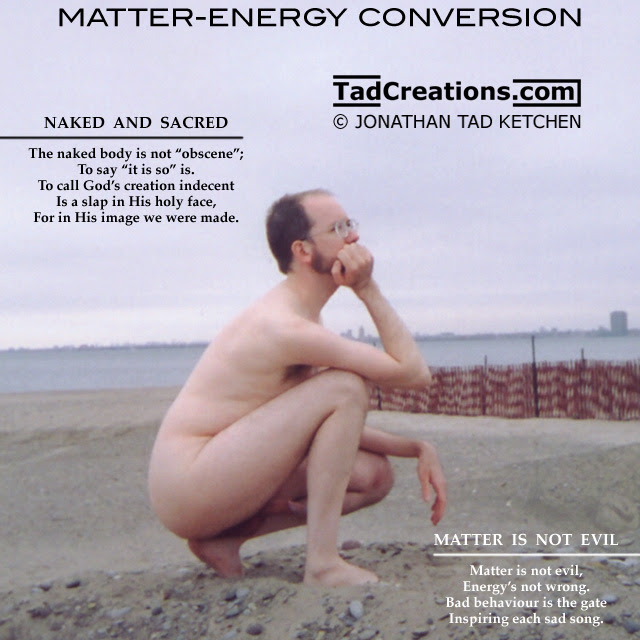 This is a self-portrait (with the aid of a ghost photographer) combined with two of my poems, summing up my views on nudity. I included the poem, "MATTER IS NOT EVIL," in conjunction with the spontaneous erection I had while the picture was being taken, because I am so tired of the hypocrisy of so many nudists who preach body acceptance yet condemn innocent erections. The erection is often involuntary and happens at the time of its own choosing, whether the owner likes it or not. My message to my fellow nudists is spontaneous erections are not behaviour; they are a fact of life. In a nudist setting, having an erection is not bad behaviour; playing with it is. If an involuntary erection appears, do not shame the innocent by telling him to cover his hard penis with a towel or take a dip in the water to hide the offensive member; unless you want to take back your "body acceptance" mantra and join the mainstream world who finds human skin, which God created, to be offensive.

Below is a response I wrote to someone who complimented me on "MATTER-ENERGY CONVERSION." It may repeat some points made in my essay above, but it also makes new points:

Thanks for the compliment on "MATTER-ENERGY CONVERSION." The "NAKED AND SACRED" poem is my general view on nudity. I thought the "MATTER IS NOT EVIL" poem would also fit, especially in the lower half of the picture, in which I had a spontaneous erection. In nudism, erections are not the norm, but they still happen; if they never happened, the man would need to see a doctor. It's a medical fact that even fetuses in the womb get erections. Many erections occur while men sleep and are totally unaware of them. They are a natural and necessary part of life, throughout life; and I think when the so-called "body acceptance" world of nudism shames men for having spontaneous erections, it is like shaming women for having menstrual cycles. It is also like the clothing-obsessed world shaming nudists for wanting to be nude. Perhaps all the erectile dysfunction out there is a symptom of being ashamed of a natural and necessary bodily function; most erections are spontaneous and are necessary to penile health. An erection is not bad behaviour. An erection is not behaviour at all, any more than breathing is. Of course, you can engage in bad behaviour with an erection, but you can also engage in bad behaviour with alchohol. Banning alchohol was tried with Prohibition, but it failed miserably because alchohol was never the problem. The problem was the human abuses of it; a.k.a. behaviour. Likewise, erections should not be an issue in the body acceptance culture of nudism or any other culture, for that matter. Erections are a natural and God-designed part of life, and are often totally involuntary, like the beating of the heart and expansion of the lungs. All of God's creations are good. Only their misuse is a problem.

I think the problem arises in what you consider misuse of an erection...an erection is a natural prelude to sexual activity...

That's my opinion, though not shared by most family nudist environments, so, in that context, it is wise to avoid walking around with a boner, unless you want to be kicked out. Again, I think this attitude is stupid for a "body acceptance" lifestyle, but that's reality.

"...an erection is a natural prelude to sexual activity..."

Does that mean when you wake up in the morning and get an erection that means you are "prelude to sexual activity"? Or just a natural thing that happens to all men since morning erections are normal?

BTW, when you start getting older, you'll miss them since they are not near as frequent.

A morning erection is not a prelude to sexual activity. When one's bladder becomes full during the night, it places pressure against the prostate gland and this gland initiates an involuntary erection. Proof is that if you should be up during the night and urinate, the chances of awakening with an erection are less than if you did not urinate. This is medically proven people, believe me.

Thanks Anon., for the medical perspective ;-)

I totally agree with you. The penis is a beautiful male part, either erect or flacid. An erection is a natural beauty of a male